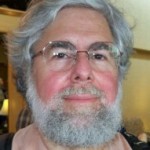 Areas he follows in particular include desktop/notebook/handheld mobile computers/computing, self-employment/telecommuting, UPSs, virtualization, storage and accessories; printers, SOHO Linux/OpenSource, security, network/IT management, WiFi and VoIP… plus whatever else he get assigned, of course!

His articles have appeared in publications and sites including CIO, ComputerWorld, eWeek, IEEE Spectrum, iPass Connect, Network World, NewsForge, The O’Reilly Network, Processor, and TechRevu (plus lots of magazines that don’t seem to be around any more). Most recently Daniel was Executive Editor for Byte.com magazine.

Daniel wrote one of the first general-audience Internet books, THE INTERNET GUIDE FOR NEW USERS, and was founding editor of INTERNET WORLD magazine, and then an Internet columnist for numerous magazines. He’s spoken at computer industry events including Comdex, Internet World and Interop, as well as at science fiction conventions, and been a radio show guest. (“Show biz is my life!” He also writes science fiction, humor, song parodies, and PR, and is an amateur magician.

Daniel’s web site is at www.dern.com, and his technology blog, Trying Technology is at www.TryingTechnology.com.

Lately, he’s been writing short-short Dern Grim Bedtime Tales, Few Of Which End Well (see www.DernGrimBedtimeTales.com) — over 50 so far! Ask to hear one! — and other kids/tween stories, and is working on a second sf novel.